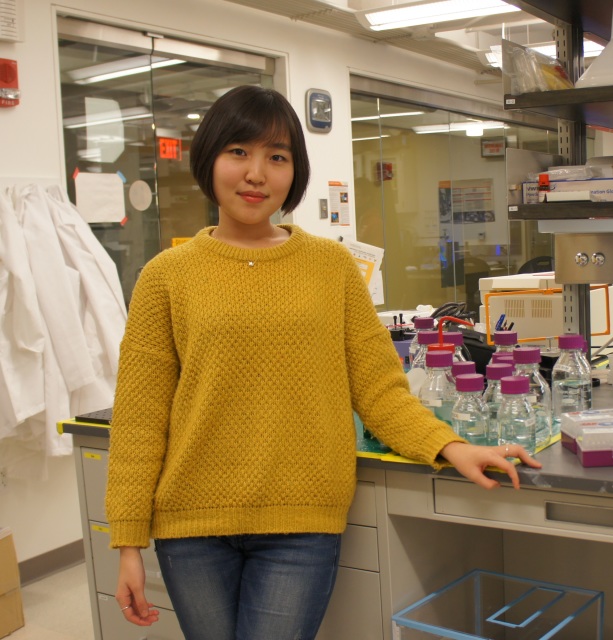 Dr. Suin Shim received her undergraduate degree in Mechanical Engineering from the Pohang University of Science and Technology(POSTECH), S. Korea (2010). She received her M.A. (2012) and Ph.D. degrees (2017) in Mechanical and Aerospace Engineering from Princeton University. She is currently a Postdoctoral Research Associate at Princeton University, continuing her research on interfacial flow problems. She studies low Reynolds number flows in various geometries that often has complications due to competing forces at the interfaces. Her current research includes water cleaning applications using electrolyte diffusiophoresis and spontaneous particle migration in microfluidic channels driven by CO2driven diffusiophoresis.

This dissertation presents various systems that involve interfacial flows coupled with heat and mass transfer. The work is divided into four separate parts studying equilibrium behavior of CO2 bubble dissolution in a flow-focusing microfluidic channel, surfactant effects on the coalescence cascade of liquid drops, evaporative cooling with a thin film flow of water, and the diffusiophoresis of charged particles driven by CO2 dissolution. We present experiments and support the observations with theoretical models.

In the first chapter, we study the effect of surfactant and gas exchange on the dissolution of a CO2 bubble in a microfluidic channel. When a CO2 bubble is generated in a flow-focusing microfluidic channel, it rapidly dissolves and reaches a steady-state radius. This apparent equilibrium behavior of the bubble is due to the inflow of air which was originally dissolved in the aqueous phase. Moreover, different surface densities of surfactant molecules that cover the gas bubble control the initial composition of the bubble, which leads to different equilibrium fadii. The multicomponent model predicting equilibrium behavior is studied for both spherical and cylindrical bubbles.

In the last chapter, diffusiophoresis of charged particles drive-by CO2 bubble in a Hele-Shaw cell and suggest some modeling ideas including multicomponent dissolution.